One of the main tasks this week has been clearing out the old shed.  The main content was garden tools and they are in the new metal shed now.  The residue of stuff was Flint, bone and wood tools with a few boxes of model skulls - left over replicas that I created when I was teaching Stone Age Tools courses. 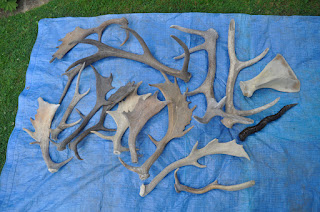 There are antlers which have been used as exemplars and also used for making tools. 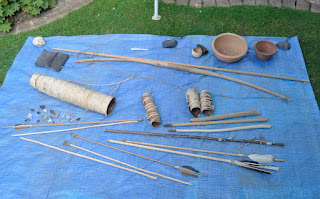 A harpoon shaft and bow, with a quiver full of arrows and assorted arrowheads and shafts.  The fletchings are somewhat decayed and need re-doing. 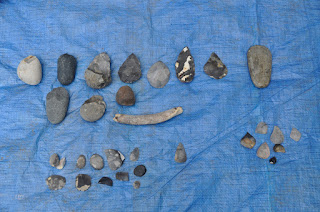 A selection of hand axes and a few scrapers and burins include a Mousterian point and a polished axe head. 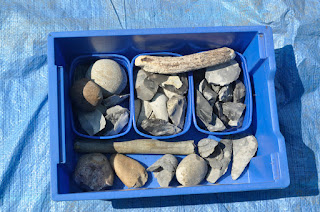 Another box of flint tools includes some knapped flint flakes re-assembled and glued to show what was removed in the making of a stone hand axe. 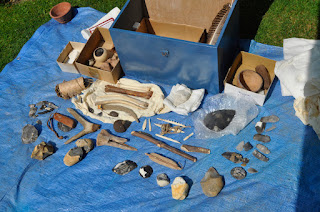 My demo toolbox, which I used to take to talks and fairs contains a wealth of tools and materials, including ox bones and bone harpoon points as well as a few composite tools. 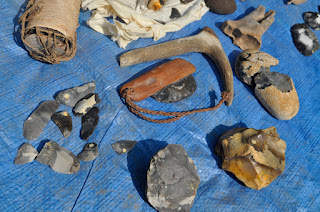 A favourite of mine is the yew handled and leather strapped flint butchering cleaver, seen next to a deer antler digging tool.  The two big flint cores at the bottom of this picture show a recent one in natural grey and a pattinated core from a site at Henley on Thames, dating back to the late Palaeolithic. 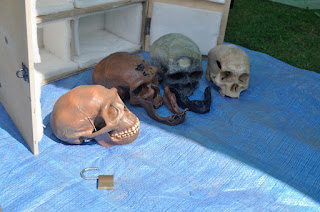 This box of modelled skulls shows the progression of features from Homo erectus to Modern Man. 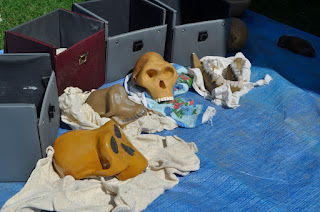 Another set of skulls shows Ramapithecus, Australopithecines and a test model for a Gigantopithecus jaw. 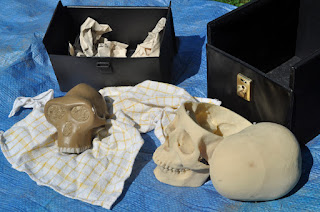 There are more skulls, including this Australopithecus afarensis skull based on specimens from the Afar Valley in Ethiopia. 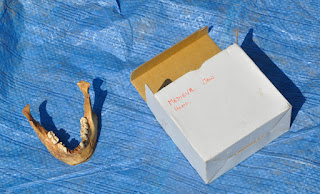 And at the last minute, I found this resin cast of a mediaeval jaw in a plain white box with no further information.

It is 15-30 years ago since I made these tools and models.  Many of the older tools were tested to destruction.  I have worn out at least 5 bows and endless arrows.  There are a few more skulls and artefacts in a secure location which I need to check out.  This is becoming a bigger clear out than I expected at the start of the project.